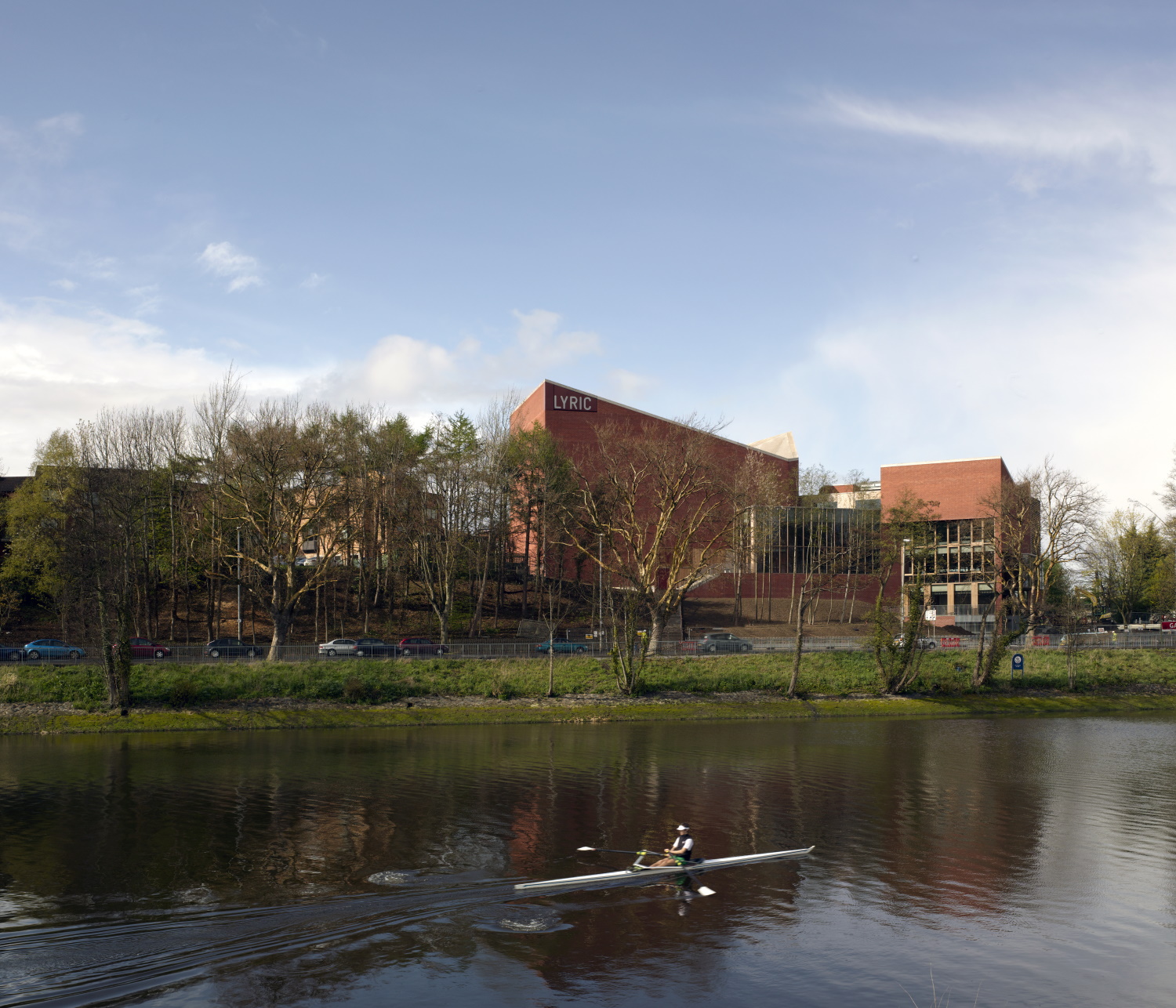 The RIAI has awarded the RIAI Gold Medal (2010-2012) to O’Donnell + Tuomey, for the Lyric Theatre in Belfast on 8 December 2021. The medal was presented by RIAI President Ciaran O’Connor FRIAI to Sheila O’Donnell and John Tuomey, co-founders of the practice.

Standing on sloping site between Belfast’s brick streetscape and the serpentine parkland of the River Lagan, the design of the Lyric is a response to site, setting and context. The building’s striking irregular shape is a direct response to these conditions. Materials have been chosen to endure and for their craftsmanship and this extends to the rich timber-lined auditorium.

The RIAI Gold is the highest honour in Irish Architecture and has been presented by the RIAI since 1934 for a design of exceptional merit by an RIAI architect, in Ireland or internationally. The project must be completed within a defined three-year period and the medal is awarded several years after completion so that the success of the building can be confirmed by the passage of time.

Michael D. Higgins, President of Ireland, in a special message to the winners and the RIAI, said: “As a society we place enormous trust in our architects, charging them with visualising and designing the buildings which shape the environment in which we live our daily lives. Our architecture not only reflects the contemporary moment in which it was built. It also captures that moment for future generations, allowing them a greater understanding of the past from which the modern age has flowed. That is an invaluable gift to society, and a great responsibility for all those charged with the creation and construction of the edifices which define our landscapes. This Triennial Gold Medal is an important recognition of those who have excelled in this most critical field. I congratulate its winners, and commend The Royal Institute of the Architects of Ireland for its greatly valuable and generous work.” 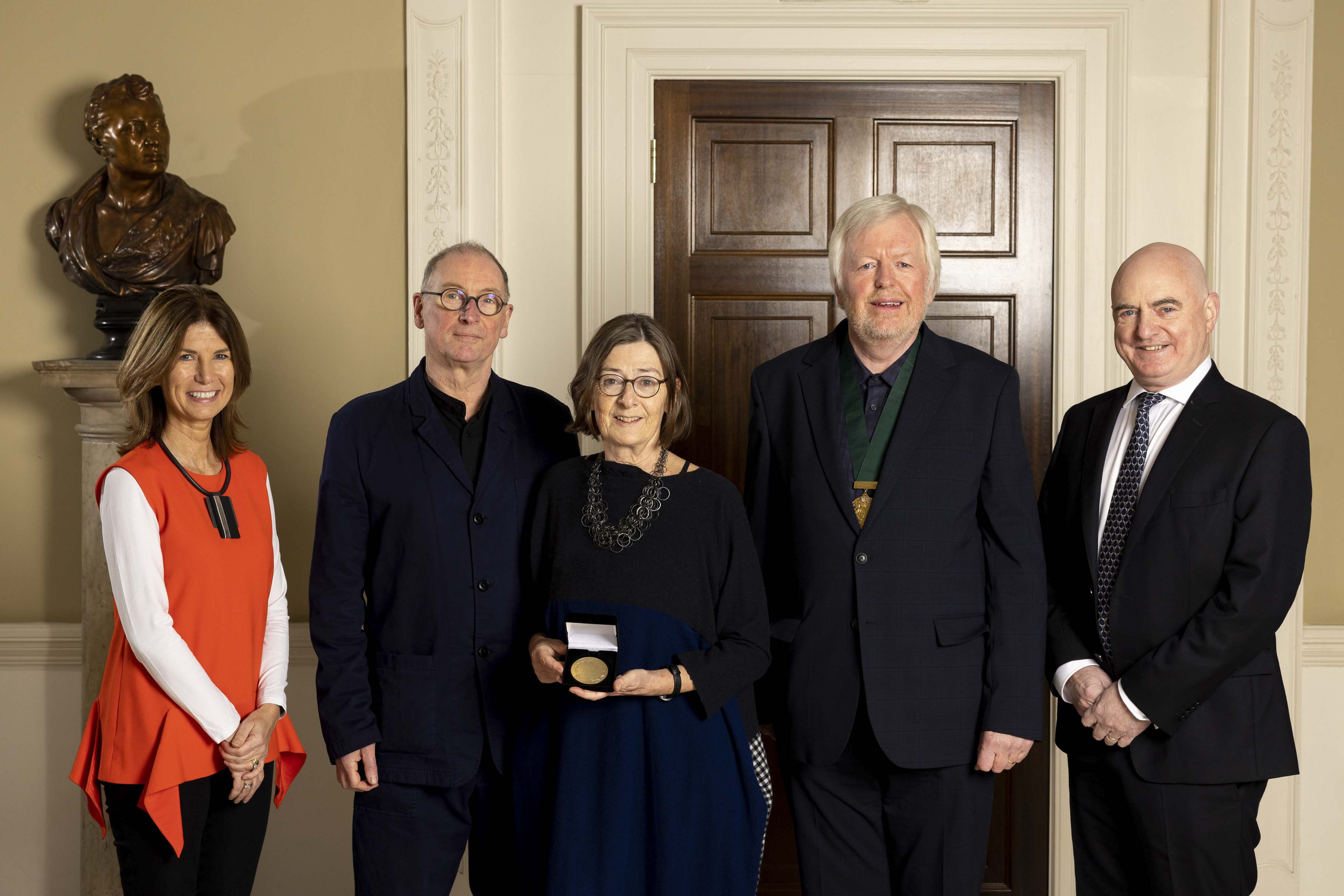 Ciaran O’Connor FRIAI, RIAI President, said: “I would like to congratulate Sheila O’Donnell and John Tuomey and their colleagues as well as their clients from the Lyric Theatre on this outstanding building – a worthy recipient of the RIAI Gold Medal. This is the second RIAI Gold Medal for O’Donnell + Tuomey who were previously awarded for the Ranelagh Multi-Denominational School. The RIAI Gold Medal demonstrates the enduring value that architecture brings to society and people’s lives.”

Peter Hynes FRIAI, Chair of the Jury, read the Jury Citation: “The Lyric Theatre was the subject of a design competition won in 2003 by O’Donnell + Tuomey. The Architects then engaged in an intense and extensive dialogue with client and users before being novated in 2009 to join the main contractor for a two-year construction period. Viewed after a first decade in service the Lyric today is a deeply considered and exquisitely crafted building which responds to and engages with its physical and cultural contexts and enriches both. It combines the welcome of arrival with the drama of movement and the surprise of discovery on many levels. It integrates public functions and programmatic requirements in a generous, innovative and mutually supportive way and it serves as a focal point for the local community and the wider creative community of the city and beyond. This distinguished piece of Architecture is a very worthy and welcome addition to the ranks of the winners of the RIAI Gold Medal.”

There was a strong shortlist of buildings for the RIAI Gold Medal for the period 2010-2012, from which the Lyric Theatre by O’Donnell + Tuomey was chosen by the Jury as the Winner:

About the Lyric Theatre – Architect’s Statement

The Lyric Theatre stands on a sloping site at triangular junction between the grid pattern of Belfast’s brick streetscape and the serpentine parkland of the River Lagan. The architectural design was developed in response to the urban and landscape conditions of the site. The building site was tightly restricted and irregular in shape. The budget was strictly limited. All the building materials are selected to endure and crafted to weather with age.

The skyline displays the principal elements of a producing theatre, mainly solid volumes closed to view.  Transparent social spaces flow around the fixed forms of Auditorium, Studio and Rehearsal. Three acoustically isolated brick boxes stand in the circulatory system like rocks in a stream. There are three different points of entry, one for trucks and two for people, all tied to existing street levels.

The Auditorium is a single parabolic rake, running counter to the slope of the site, with services in the under croft. The spatial scheme maximises sightlines and generates intimacy, with the feeling that the actors are in the same room as the audience. The seating layout is creased along a line between two entrance lobbies. The timber floor folds slightly in plan and section, like an open hand, to hold the body of the audience together, focused on the stage and within sight of each other. The faceted timber lining is tailored to accommodate the sometimes conflicting requirements of stage-lighting, sightlines and audience acoustics.

The Studio is a 6 meter high brick-lined “empty space”. Its flexible layout provides for end-stage, thrust, traverse, in-the-round, cabaret and promenade performance possibilities. The Studio has a picture window with a sliding shutter to allow for occasional visual communication between street and theatre activities. The Rehearsal room dimensions are related to the main stage and studio. The room is located upstairs over the Bar, roof-lit with river views through the treetops. This acoustics of this room allow for recital and readings.

The new building replaces a substandard structure built in the 1960s.  The building is the result of an open architectural competition held in May 2003, and eight years immersion in the complex process of briefing, design, fund-raising, demolition and construction.

Founded by Sheila O’Donnell FRIAI and John Tuomey FRIAI, O’Donnell + Tuomey is a studio-based practice, with offices in Dublin, Cork and London. Committed to the craft and culture of architecture, they have been involved with urban design, cultural, social and educational projects at home and abroad. The practice has an international reputation for its engagement with complex urban situations and sensitive landscapes. They have completed schools and university buildings, theatres and cinemas, community centres and social housing, art galleries and libraries in Ireland, the UK and on the European mainland.

Winners of more than 120 awards, their completed schemes include the regeneration of Dublin’s Temple Bar (with Group 91) and its Irish Film Institute and National Photography Centre, The Glucksman Gallery in Cork, Irish Language Cultural Centre in Derry, Lyric Theatre in Belfast, Photographers’ Gallery and LSE Student Centre in London. They have exhibited six times at the Venice Architecture Biennale. They are working on a new cultural quarter under construction at the Olympic Park in East London, including new buildings for V&A East Museum and Sadler’s Well Dance Theatre, and a number of social housing projects for Dublin City Council.

Current projects include an Academic Hub and Library for TU Dublin at Grangegorman campus, the Swords Cultural Quarter, and a new School of Architecture for the University of Liverpool. https://odonnell-tuomey.ie/

About the RIAI Gold Medal

The RIAI Gold Medal is the highest honour in Irish Architecture.  It has been presented by the RIAI since 1934 for a design of exceptional merit by an RIAI architect, in Ireland or internationally.  The project must be completed within a defined three-year period and the medal is awarded several years after completion so that the success of the building can be confirmed by the passage of time.  The first Gold Medal building in 1934 was St Thomas’s Church, Dublin by Frederick Hicks, FRIAI and the most recent Bocconi University in Milan by Grafton Architects. Many of Ireland’s most renowned buildings are Gold Medal winners: Dublin Airport (1938 - 1940); Busaras (1953 - 1955); Burt Church (1965 - 1967); Ceide Fields Visitor Centre (1992 - 1994) and Right up to Croke Park Development (2001 - 2003). More information is on the RIAI Website.

Back to News
Search RIAI